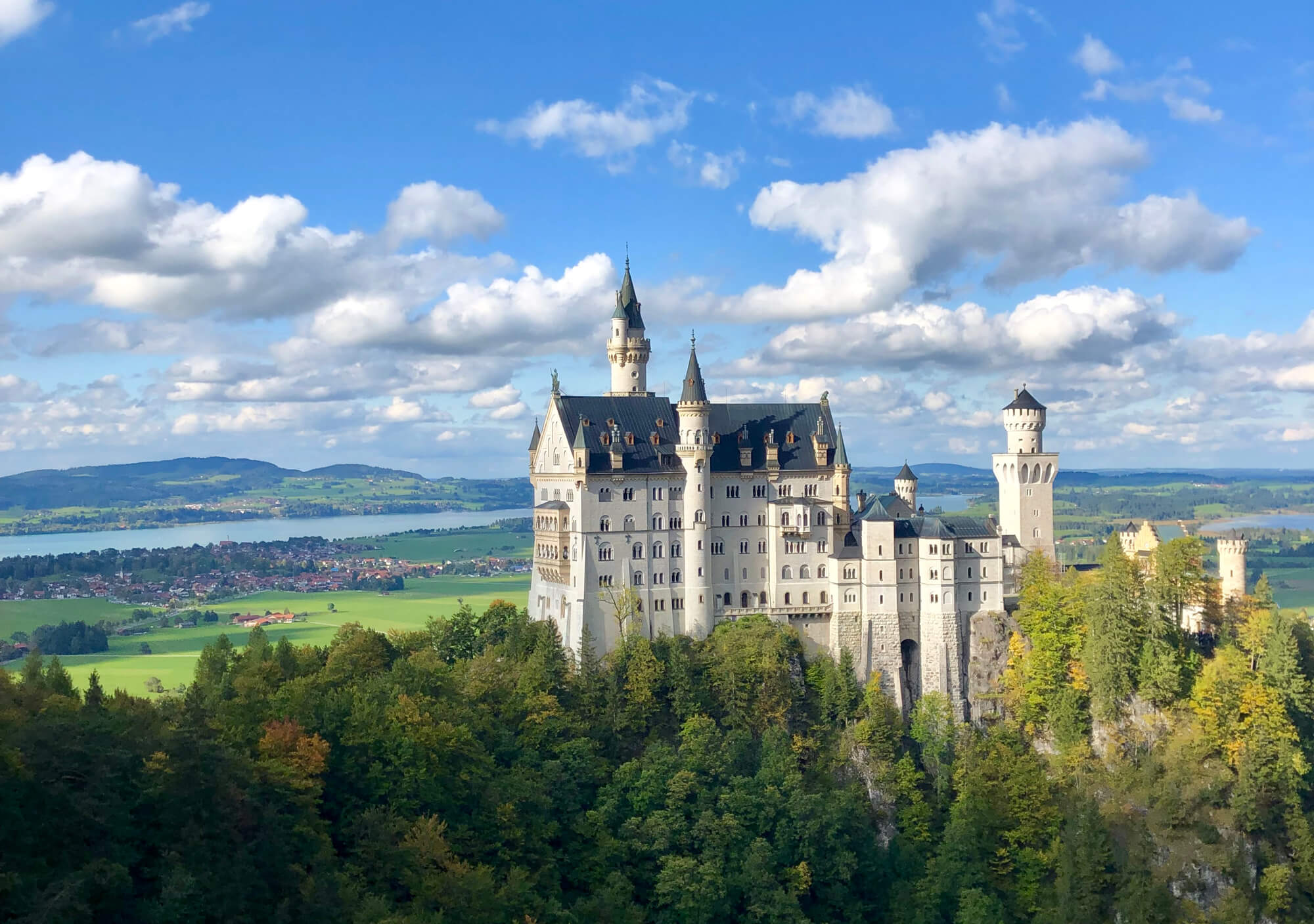 One of our favorite travel resources, Travel + Leisure Magazine, just published this great content about the Neuschwanstein Castle. A trip to this magnificent destination is part of all of our standard packages.

Few places on Earth look more like storybook illustrations that Neuschwanstein Castle. With its towers, turrets, frescoes, and throne hall, Neuschwanstein (or Schloss Neuschwanstein, as it is called in German) looks like it was plucked straight from your favorite fairy tale. But the story behind this over-the-top palace nestled in the Bavarian Alps is less idyllic.

King Ludwig II of Bavaria commissioned the cliffside castle in 1868, just two years after Austria and Bavaria were conquered by Prussia during the Austro-Prussian War (sometimes called the Seven Weeks’ War), effectively stripping Ludwig II of his powers. He quickly retreated into a private fantasy world, surrounding himself with opulent castles where he could live out his dreams of being a true, sovereign king.

Ludwig II never saw the final Neuschwanstein, according to the Bavarian Castle Administration. He died in 1886, and the final towers weren’t completed until 1892. But within weeks of his sudden and mysterious death, the magnificent castle was opened to the public, where it quickly became one of the region’s most visited attractions.

Today, more than 1.5 million visitors come to see Germany’s fairy tale castles, making it one of the most visited castles in the world. Here’s everything you need to know about this charming attraction before you make the trip.

Where is Neuschwanstein Castle?

Its modern name, thought to be a reference to Wagner’s character, the Swan Night, was not acquired until after Ludwig II’s death.

Travelers visiting Neuschwanstein Castle will need to travel to the village of Hohenschwangau, where the ticket center is located

How tall is Neuschwanstein Castle?

Though not particularly tall — Neuschwanstein’s highest tower reaches a height of 213 feet — the castle’s perch on a hill gives it an imposing silhouette.

When Was Neuschwanstein Built?

Construction of Neuschwanstein broke ground during the summer of 1868, but the first foundation stone wasn’t laid until September 5, 1869. By 1873, parts of the castle could be occupied by Ludwig II, though he never lived to see his full vision realized. The Bower and Square Towers were completed in 1892: nearly a quarter of a century after work on the castle began, and many years after Ludwig II passed away and the castle was opened to the public.

According to plans, the castle was meant to have more than 200 rooms. But just over a dozen were finished before funds for the project were cut. Estimates put the total square footage at roughly 65,000 square feet.

Why Was Neuschwanstein Built?

Ludwig II’s reputation as an eccentric, reclusive king makes it easy to see why Neuschwanstein is so often called “the castle of the fairy-tale king.” In a letter to his friend, the German composer Richard Wagner, Ludwig II said his intentions with Neuschwanstein were to “rebuild old castle ruin of Hohenschwangau…in the authentic style of the old German knights’ castles.”

He described “guest rooms with a splendid view of the noble Säuling, the mountains of Tyrol, and far across the plain;” and spoke of a Singer’s Hall and an ample castle courtyard.

“This castle will be in every way more beautiful and habitable than Hohenschwangau,” Ludwig II told Wagner.

But it is believed — almost without dispute — that Ludwig II built Neuschwanstein for political and deeply personal reasons. In 1866, Prussia emerged victorious from the Austro-Prussian War, forcing Bavaria to accept an alliance with the empire. King Ludwig II of Bavaria essentially lost his power. It is thought that Neuschwanstein became the centerpiece of Ludwig II’s imagined kingdom, where he could act as a true royal.

The Peculiar Life of King Ludwig II of Bavaria

Before King Ludwig II of Bavaria found himself a servant to Prussia, he had a rather comfortable childhood at Schloss Hohenschwangau. His parents noted an inclination for play-acting (a proclivity that would only deepen in later years), and he was fond of the musical dramas created by the great composer, Richard Wagner.

At the young age of 18, Ludwig II became King of Bavaria. But he would only reign for two years before Bavaria’s foreign policy and military powers, were seized by Prussia.

Neuschwanstein Castle, with its white limestone façade and deep blue turrets, is rumored to be real-life inspiration for the castle in the Disney classic, Cinderella, released in 1950. The resemblance, after all, is striking.

But there’s another Disney castle that looks quite a bit like Neuschwanstein — and that’s Sleeping Beauty’s castle in Disneyland. Before Walt Disney began constructing his Californian theme park, he and his wife took a trip to Europe that included a stop at Neuschwanstein. Representatives of the park told The Orange County Register that Disney did have Ludwig II’s remarkable home in mind for Sleeping Beauty’s fairy tale palace.

When is the Best Time to Visit?

Whether flanked by snow-covered peaks or gleaming-white in the summer sun, there’s no bad time to visit Neuschwanstein Castle. But with some 6,000 tourists streaming through the ramparts every day, visitors may want to avoid the peak summer months of July and August.

To avoid long lines, get to the Ticketcenter Hohenschwangau very early (even before opening) or after 3:00 in the afternoon, when the crowds begin to thin. If possible, schedule your Neuschwanstein Castle tour on a weekend, or plan your visit in the off-season. Save for major holidays (Christmas, for example) the number of visits to Neuschwanstein drops significantly between November and April.

A strong argument could be made for visiting Neuschwanstein Castle in the fall, when the Bavarian Alps are transformed by autumn foliage, temperatures are mild, skies are relatively clear, and the summer crowds have dissipated. Travelers planning to visit Neuschwanstein in autumn should sync their trip to the Munich’s 16-day Oktoberfest celebration, which typically straddles September and October. Munich is a popular home base for travelers who come to see Neuschwanstein, and other beautiful German castles.

While a snow-covered Neuschwanstein is the stuff of travelers’ dreams, it can be tricky to visit the castle during this time of year.  One of the best viewpoints — Marienbrücke, or Mary’s Bridge — is typically blocked off during the winter, and the temperatures can plummet below freezing.

An off-season, springtime trip to Neuschwanstein Castle (March or April) will offer travelers pleasant weather, photographs of the white castle against a lush green back drop, and slight crowds. Travelers visiting in May or June will enjoy similar benefits during their shoulder-season tour of Neuschwanstein.

Balmy weather, school holidays, and longer hours make Neuschwanstein Castle a particularly popular attraction in the summer. But visitors during peak months (July and August) should be prepared for long lines and considerable crowds.

Despite Ludwig’s grand plans, only 14 rooms are currently finished — and on view for visitors. On the guided tour of Neuschwanstein Castle’s interior, you’ll have access to the cave-like grotto, the king’s bedroom, and the Singer’s Hall, among others.

Highlights of the Dressing Room include the magnificent ceiling painting, and murals illustrating the works of poets Walther von der Vogelwide and Hans Sachs. The entire room is finished in rich gold and violet silks.

Few rooms in Neuschwanstein capture Ludwig’s obsession with being king quite as well as the Throne Room. The two-story space captures the majesty of Byzantine churches, and is finished with a 13-foot-tall chandelier, a painted cupola, and elaborate floor mosaic. Ironically, there was never a throne in this space.

Exterior of the Castle

One of the highlights beyond the castle’s walls is Marienbrücke, the bridge which hangs over a waterfall and offers the most iconic views (and photo opportunities) of Neuschwanstein. After your tour, be sure to spend some time exploring the wooden trails around the castle, which provide countless opportunities to admire the surrounding Bavarian Alps.