Oktoberfest is by far the biggest beer festival in world. Hosted every year in the beautiful city of Munich, Oktoberfest attracts as many as 7 million people while the festivities take place. Oktoberfest2020 will kick off September 19th with a beautiful Opening parade and end October 4th with fireworks on the grounds. So grab your lederhosen and dirndls and be part of the fun!

You might have read about the different Beer Tents at Oktoberfest. There are 17 large and 21 small tents. Every brewery serves at several beer tents, as only breweries that brew their beer in Munich are allowed to have a tent on the grounds. Fun fact of the day : The big 6 responsible for all the fun and hydration during Oktoberfest are : Paulaner, Spaten, Hofbrau, Hacker Pschor, Lowenbrau, Augustuner.

As you can see, it is local oriented event. Statistics show that only 12% of the visitors are foreigners. Bavarians lover their good beer and half chicken. Small tents are what we consider “the hidden treasure of Oktoberfest”. If you want to enjoy some of the best meals, have the authentic “umpa lumpa” experience and mingle with the locals – small tents are your best call to do so. And as they say in Bavarian “Klein aber fine” (Small, but fine).

What is the difference between small vs. large beer tent?

Basically, the difference between small and large tent lays in the amount of people that they can accommodate. Small beer tents have the capacity between 100-700 seated people. Some of them do offer a small beer garden outside as well. If not a beer garden, they always have a kiosk sight where they sell food. As small tents are popular for their fine cuisine, you will see a lot of locals actually grabbing food there, rather than sitting inside the tents. The way we phrase is it is, “Small tents are food first and beer second, while large tents are beer first and food second.” Also, small tents are almost all locals.

The big tents accommodate between 3,000-10,000 seated people. I know… “Wow”. Big tents have a ground floor area as well as balconies. When you think about Oktoberfest, you are thinking about the large tents. They are the epicenter of the party. Popular both for locals and tourists, you will see people dancing on the benches pretty much from 10AM in the morning when the tents open. Weather you are seated on the balcony or the ground floor, the fun is definitely guaranteed!

Do they have a live band in the small tents as well?

Absolutely. After all it is Oktoberfest, and it is all about that oompa songs. Same as in the big tents, in most of the small tents the live band are playing from morning till closing (11PM). The small tents accommodate one of the most traditional bands. They combine both German music and some pop covers as well. What makes the small tents special on that aspect, is that the bands are usually accompanied by the famous whip crackers. Which is a great and authentic experience when at Oktoberfest.

How does it work for ordering food and beer in the small tent vs the big tent?

Now we are talking. Food. If you want to have one of the most delicious Oktoberfest meal, you must experience one night in a small beer tent. They are famous for their food and each tent specializes in different meals : roast duck or chicken, sausages, dumplings, fish…you name it. Those tents attract the foodies and they have been rated to have the best food at the Oktoberfest grounds. In the small tent the procedure is : it’s all about the food. You can sit down and choose of a menu while making some new friends with the locals around you. And if you have already been to a large tent, you will probably want to have something different as a meal than half chicken. So what a better opportunity to do so?As the small beer tents are still owned by the breweries that are responsible for all the goodness at Oktoberfest, you are not missing out on the beer part either. Small beer tents are usually the place where you would go for two or three course meal. Of course you don’t want to miss out on the mouth watering apple strudel.

When it comes to the large beer tents, its all about the beer. You want to go there and get the party going. Unlike the small tents, here everyone gets 2 beer vouchers and 1 food voucher (usually half chicken). Large tents are all about the half chicken. This will always be your best call. They are famous for it and it is a must try! Some large tents nowadays offer a set menu. As you can imagine, it makes it much easier for them to prepare that in advance (you can imagine what it looks like serving food to 10,000 people) Set menu usually includes pork or chicken with some gravy and greens on the side. If you have a tent with a set menu, keep in mind that it comes out at a specific time. So you might have a couple of hours before your dinner is served. But not to worry, beer servings never stop! And this is when the platters with cheeses and meats and pretzels come in place. In comparison with the small tents, you pay on the go at the large tents. Once you finish your vouchers, they happily accept cash. No credit cards allowed for payments in the large tents.

Why do they have both small and large tents?

Well, when Oktoberfest first started, it was all designed for locals. So small tents were a perfect match and were able to accommodate everyone. Nowadays, the festival turned out as the biggest beer festival in the world, attracting people from all over the world. The small tents are still there, as they originate from the beginning. But in order for then to be able to accommodate everyone nowadays, they simply had to start building bigger tents. An example for that is Schottenhamell beer tent for example. It started with a seating are for 50 people. Nowadays they expanded to 5,000 people (including the beer garden). As only the big 6 breweries are allowed to serve beer on the ground, both small and large tents offer the same beer and are owned by the same breweries. Whether you are in a small or a large tent, beer, food and live band always help you have an absolutely unforgettable Oktoberfest experience.

What is the crowd like in comparison small vs large tent?

Fun fact of the day: still to this day, only 12% of the people joining are tourists. Oktoberfest is still a huge Bavarian tradition, and Bavarians love some good food and beer. Usually the small tents are more popular with the locals. And rule number one when traveling abroad : “Go where the locals go”. We like to refer to them as a “hidden treasure” as you always have an absolute great experience, yet they are not known to everyone out there. Do people dance in the small tents: Absolutely yes! Unlike the large tents, you won’t get on the bench, however you have enough space around the table to show your best dance moves!

Large tents attract everyone! Even toddlers are out there, enjoying the festivities. Large tents definitely get more rowdy, but you can imagine that happens with so many people around.

Do people dress up for both small and large tents?

Absolutely. As mentioned earlier, you do get the full on Oktoberfest experience, no matter which beer tent you are at. It is a dress up occasion after all, so you will be surrounded by dirndls and lederhosen at all times. Locals love to “show off” with their outfits and share all the stories and tradition behind them. Always a great chat if you end up sitting close to someone local.

Do they have the same Opening Hours ?

Both small and large tents follow the same rules when it comes to opening hours. Once the grounds are open at 9AM, tents open at 10AM and close by 11PM. Weather you are in a small or large tent, you always have certain amount of time assigned to your reservation. It can be anywhere between 2-6hrs, depending on how many times a day they flip the tables. The usual evening reservations are from 6 or 7, until closing. Afternoon reservations are anywhere between 11AM and 4PM.

A full Oktoberfest experience would include both a small and a large beer tent reservation. Prep yourself with the small beer tent to get the feeling of Oktoberfest and kick off with a large beer tent, dancing on the benches till closing! Small beer tents is where you get your meal first and beer second, large tents do it in reverse – beer is the number one priority. So if you are ready to get the full on Oktoberfest experience and get the best of both worlds, check our Oktoberfest2020 packages and don’t miss out on the fun next year! 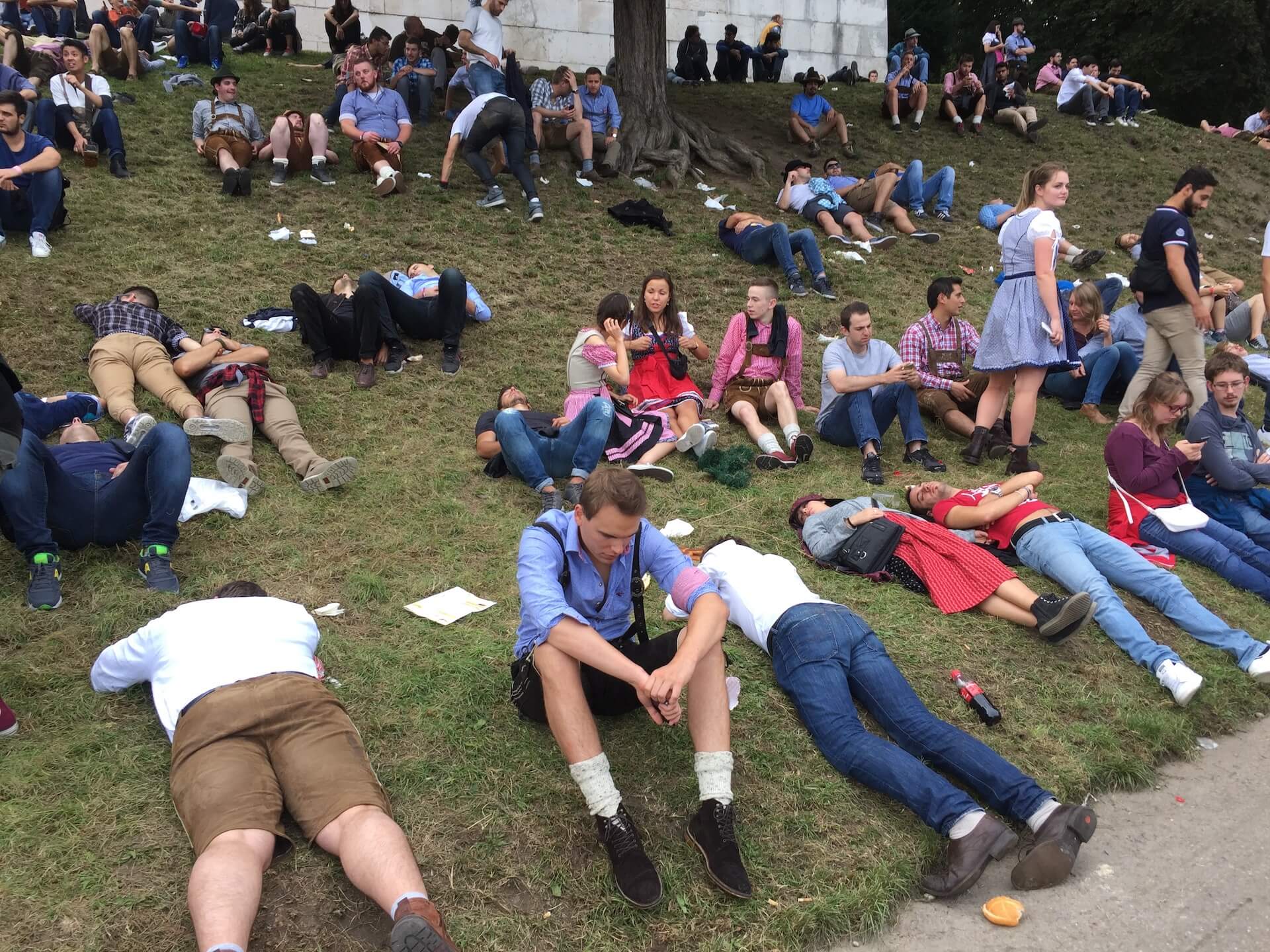 If you are heading to Munich for Oktoberfest this year, you need to be prepared. It’s an experience like no...